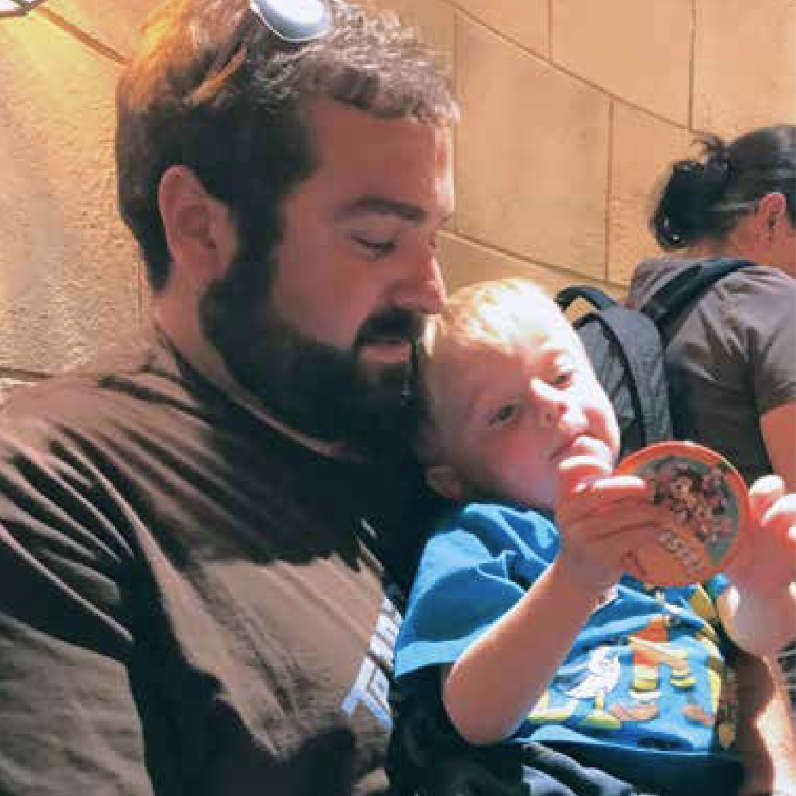 Greg and Scotty’s story was written by Greg’s mother, Susan, who is also Scotty’s grandmother.

Our family’s story starts when our son Greg, brother to our firstborn, Lauren, was born in 1989 in Missouri. He weighed a robust nine pounds at birth. For the first few weeks, he was colicky and had frequent loose stools, but our pediatrician wasn’t concerned as our little boy was gaining weight. At eight weeks old, when he began to also experience vomiting, lethargy and weight loss, Greg was admitted to a children’s hospital in St. Louis.

Routine testing was negative for infections and parasites, but our son continued to decline. Doctors identified his condition as intractable diarrhea of infancy, a condition most common in third world countries. Greg was taken off oral feedings and was fed intravenously to receive the nutrition he needed.

During the two and a half months that our young son was hospitalized, testing detected an erosion of villi in his small intestine, but the cause remained unknown. He was slowly returned to oral feedings of pre-digested formula. When Greg was finally discharged from the hospital, his doctors warned that he would be vulnerable to gastrointestinal infections and shouldn’t be in day care. I left my job to care for him at home.

In early childhood, Greg also suffered from multiple allergies, eczema and asthma. His pediatrician labeled it a possible autoimmune disorder. Ultimately, Greg outgrew many of his problems, and we feel very blessed that he is now a healthy adult.

Fast forward to December 2016. Our daughter, Lauren, who had relocated to the Cleveland area, gave birth to her second child, Scotty. She, too, had a healthy daughter as her firstborn. Scotty was tiny at birth, only 5 lb, 11 oz. He had frequent loose stools, and his initial weight gain was slow.

At six weeks old, Scotty developed a skin infection and was admitted to a hospital for treatment. The weeks that followed were a blur of hospitalizations. Scotty couldn’t gain weight and was labeled “failure to thrive.” He was repeatedly dehydrated despite constant efforts at feeding. His skin was dry and scaly, and he was diagnosed with possible ichthyosis, a genetic skin disorder. He also suffered from severe metabolic instabilities.

Blood testing revealed Scotty had aldosterone synthase deficiency. Ultimately, a gastronomy tube was surgically placed to provide the nutrition he needed, and this feeding tube remained in place over two years.

My husband and I made frequent trips to Cleveland to help with Scotty’s care, and to give respite to our daughter, her husband and Scotty’s paternal grandparents. I couldn’t help but see that Scotty’s condition drew familiar parallels to my experience with our son, Greg, and all the same feelings of frustration and helplessness came flooding back. I spoke to physicians about the similarities between Scotty and Greg, but basic genetic testing didn’t detect any specific abnormalities.

One day, Scotty’s paternal grandparents, who served on DDC Clinic’s board of directors, told Dr. Wang about Scotty and Greg. Thinking that the parallels couldn’t be coincidental, Dr. Wang invited us to come to the clinic and listened closely to our stories.

Leading the effort to unlock the medical mystery that had so significantly affected our family, Dr. Wang enrolled Scotty and Greg in a detailed genetic study. The answer we had been searching for came when Scotty was nearly 3 years old. Both Scotty and Greg were diagnosed with a form of IPEX syndrome: immune dysregulation, polyendocrinopathy, enteropathy, X-linked.

It was such a relief for us to finally “name it.” We now understand why these two generations of male children suffered life-threatening conditions in infancy. We also know for future generations of our family how to better diagnose and care for children who may suffer from the symptoms of this disorder. We’re encouraged that both Greg and Scotty have attained improved health with age. We’re so grateful to DDC Clinic and Dr. Wang for providing the answers our family needed.